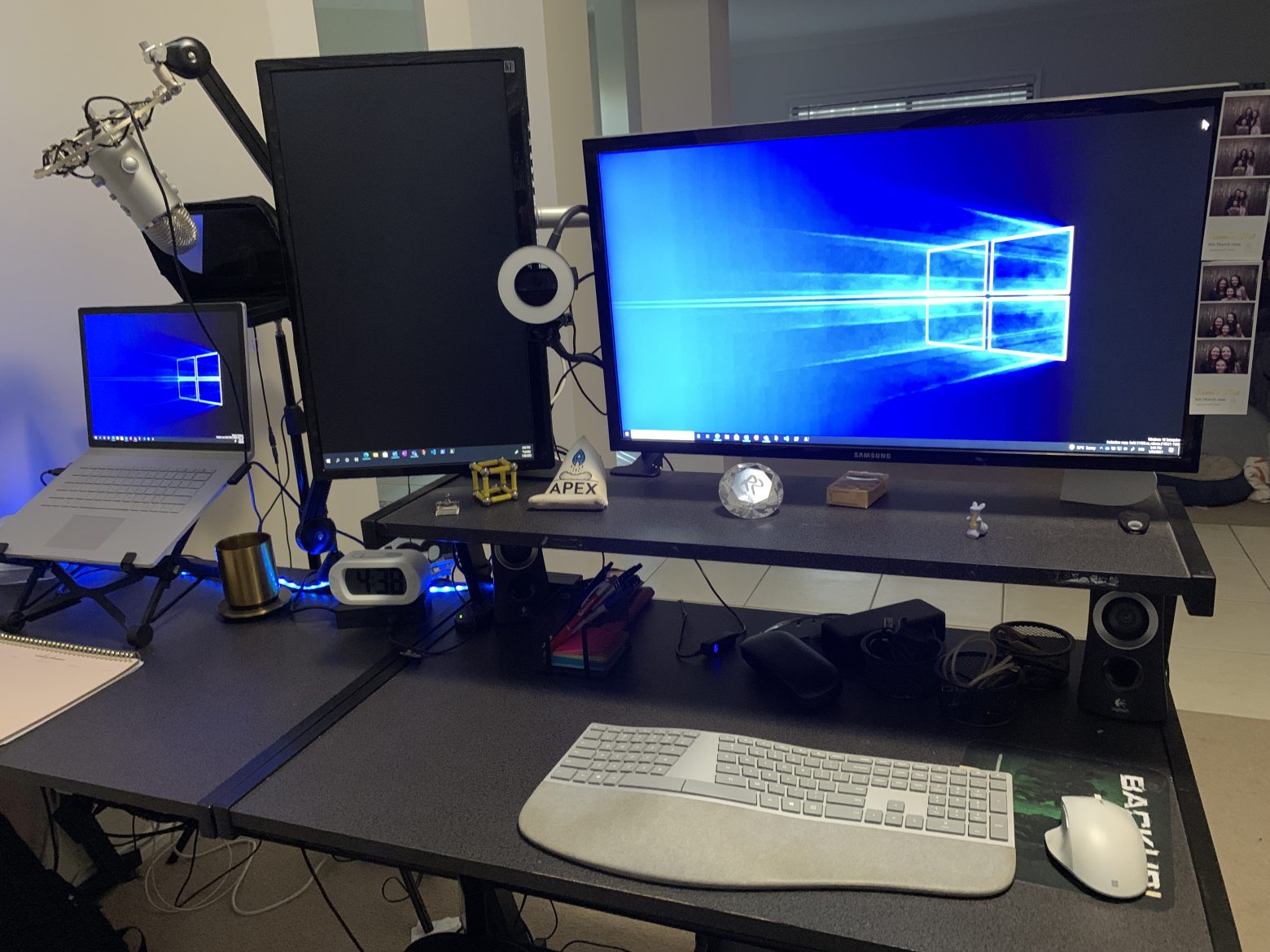 My role at Microsoft has always been primarily a remote role, from home. But as travel has  decreased, the amount of time I spend on video has dramatically increased, and that’s not just from meetings. Many technical presentations are pre-recorded (and moderated live when aired), or delivered live to camera, and I also record short promotional videos which are usually scripted for training content or events.

Here’s a walkthrough of the setup I’m currently using, to get results like this:

NB: This article contains affiliate links, and I’ll note whether equipment was provided by my employer or self-funded.

I’ve recently moved house and I’m not sure that I’m happy with my current home office configuration, but I do like the change I made to my desks. They can be placed in an L shape with a quarter circle corner filler, but now I have them side by side. What this gives me is two work areas – my main “sit and type” space with one of my monitors in portrait, and my video area, just a chair slide away! Bonus points for being able to pivot the portrait monitor to the left as an additional reference screen when I’m on camera.

My typing area has a Logitech C920 web camera with a ring light (both self-funded) between the monitors, which is fine for quick, informal meetings but I’ve had focus issues with the Logitech – it’s never quite as crisp as I’d like – and the lighting is never great because I have a full window with timber blinds behind me here.

This is where the magic happens – my view of those video recordings and remote presentations. Let’s break down the components.

The Surface Book laptop is my daily i7 warrior, provided by work.

I self-funded a Nexstand portable folding laptop stand to use with it when I was travelling, but it’s also perfect for raising the height of the Surface Book screen to just below the teleprompter rig (more on that in a moment!).

In this photo is one of my sound options – a Blue Yeti microphone on a Rode microphone arm with shock mount. This keeps the mic out of the video camera shot, picking up my voice as I look at the camera, and not being bumped on my desk.

Blue also does a similar setup as a bundle.

Of the equipment pictured, the laptop, tripod and light were provided by work – the rest are self-funded.

The tripod was provided by work to hold lighting for the first all digital Microsoft Build I co-hosted.

The Phottix Kali 150 light  is attached to the teleprompter with a Neewer 7″ Magic Arm (self-funded). My only complaint is that even with the brightness low, I still battle reflection from my glasses being picked up by the camera. Future improvement will be to encase it in a soft box.

The camera – Digital photography is a hobby I picked up in the late 90s, with my first Sony Cybershot 2.1 megapixel camera (later upgraded to a Canon EOS 300D). With Canon releasing a webcamera driver in beta, I took the opportunity to treat myself to a Canon EOS 90D, still using the (18-35mm) lens from my previous EOS camera kit. The other key piece that makes this work is a Tether Tools Case Relay power pack with the dummy battery similar to this – I’m running the camera on mains power and not stressing about battery life.

The teleprompter was also self-funded as it makes me so much more efficient. In essence it’s a few metal plates and an angled piece of glass. For meetings and presentations, I have a field monitor below, which mirrors up onto the angled glass for me to see whatever is displayed, while I’m looking down the camera lens. This makes such a difference when connecting with people – I’m looking at them in Microsoft Teams at the same time they’re seeing me looking directly at them through the camera. Eye contact really suffers when were not in person and we use it as an important part of our body language!

NB: While most external HDMI monitors will flip their display horizontally or vertically via the settings in Windows, angled glass creates a mirror image. My Thinlerain 10.1″monitor has a setting on the monitor itself for changing it to mirror mode, so the angled glass correctly mirrors it back. That might sound like a small detail but you’ll see how vital it is when you move your mouse and you want it to go across the screen in the right direction!

When I’m speaking sentences that have been scripted, I switch out the monitor for an iPad with the PromptSmart Pro software. This scrolls the text as I speak and auto-adjusts for my speed, as well as having a remote so I can manually pause, play and rewind it.

You might have noticed that my home office has no door! It’s open through to the lounge across the hallway. I’m surprised at how good the Blue Yeti mic has been in this space, as it’s known to pick up a lot of background noise.

For the best audio though, I switch over to my Rode lapel mic (self-funded), attached to a Zoom F1 field recorder, and an IFB (interruptible foldback earpiece). The field recorder takes both the mic and earpiece plugs then connects to the laptop via a single USB cable which also provides power.

This means I can be “mic-ed up” with a single earpiece you can’t see behind my hair and an unobtrusive mic clipped to my clothing, but I can still move away from my laptop by just unplugging the field recorder from the USB cable. Microsoft Teams sees these audio sources, though I do turn up the gain setting on the field recorded to -High to get a better volume level from my mic. As an added bonus, the F can also run on battery and record to an SD card, if I wanted to go mobile and still get the best sound.

The camera and microphone/speakers (or field recorder) all connect via USB, so I’ve found no need to switch to XLR. I keep debating whether to add an Elgato Stream Deck for button shortcuts to common tasks (like end a Teams meeting), but clicking my mouse isn’t that hard. I’ve yet to delve into the world of OBS software, because my current setup plus Microsoft Teams or Streamyard is meeting my needs.

My main improvement would likely be a change to the room configuration – I’d like a bigger bookshelf and less wall/no window blinds in my shot.

I’m passionate about this industry and the things that it can help people achieve.